AN INTERVIEW WITH TRUNG TRUNG DINH

The following article appeared in the New York Times Vietnam ’67 series in February 2018. Alex, Colm and Tran Thi Nga, editor of Van Nghe newspaper, interviewed and photographed Mr Dinh one chilly pre-Tet morning in Hanoi. The article is no longer available online, so we’re reprinting here to share with all fans of Vietnam in Focus.

In the Jungle: An Interview with Trung Trung Đỉnh

“Brother, when do you think we’ll have freedom?” the novelist Trung Trung Đỉnh remembers asking one of the guerrillas he fought alongside for seven years in the jungles of An Khê, central Vietnam.

“When these have completely worn out,” his comrade replied, pointing to the rubber-tire sandals on his feet, the famously indestructible “Ho Chi Minh sandals.” “Only then will we be free!”

It’s one of many war memories Mr. Đỉnh recalls with a smile that lights up the dusty Hanoi street café where we are sitting. Indeed, for all the mayhem, fear and devastation he describes from those years, the “skies packed with planes,” the “normality of death,” you sense that he misses the simplicity of jungle life. It was his youth, after all.

“I still have some pictures of myself taken at that time. I had a ragged beard, but my face shone so bright!” He gently shakes his 69-year-old head in wonder. “The hardest years came afterward,” he admits, “after ’75.”

Mr. Đỉnh is the author of many novels and plays, but it’s his first novel, “Lạc Rừng,” or “Lost in the Jungle,” that we’ve come to discuss. The book was recently reprinted for the 19th time, and many in Vietnam consider it a classic of “The American War,” although it has never reached an international audience like “The Sorrow of War,” a novel by his friend and “bạn rượu,” or drinking buddy, Bao Ninh.

He remembers his childhood fondly. “1949 to 1959 were the greatest years of my life, when I was still back in the countryside,” he says. “In my memory it was an idyllic time. We spent the days fishing, catching cicadas, watching our buffalo. I was a naughty kid, stealing fruit and fish from the neighbors.” Mr. Đỉnh is a native of Vĩnh Bảo, Haiphong, even today a rural backwater where a foreign face would draw curious stares.

Most of his relatives died in the war: a brother-in-law killed in the first American bombing of the north; brothers who sacrificed themselves both before and after he himself joined up. He lists the many family members he lost almost mechanically.

“Lost in the Jungle” tells the story of Binh, a North Vietnamese Army regular who becomes separated from his regiment in the mountains of central Vietnam, and is saved and then initiated by a band of tribal Bahnar guerrillas fighting the Americans. Binh lives with and fights alongside the Bahnar for many years, learning their language and assimilating their culture, while taking cover from helicopter gunships and setting booby traps for the enemy. But the title reflects unease about “going native.” Mr. Đỉnh points to his head, “He’s lost in here.”

“How much of the story is true?” I ask him. Like the hero of “Lost in the Jungle,” Mr. Đỉnh fought shoulder-to-shoulder with the Bahnar from 1968 to the end of the war.

“It’s a work of imagination, based on truth,” he explains. “It was the first novel I wrote after the war, and the memories were still fresh. Some of the stories I tell in the book are very close to what happened.”

As the morning unfolds, Mr. Đỉnh shares many anecdotes from his own years in the jungle. There’s a boar hunt; tales of stealing rations and weapons from the Americans stationed nearby; and another of hoisting an old parachute like a flag on the tallest tree in the forest and watching from afar as American jets unloaded bombs on it.

“Just to tease them, you see?” Mr. Đỉnh explains.

All of these stories, slightly fictionalized, feature in the novel.

The characters sprang from life too. There’s an ancient Bahnar man, called “Old Phoi” in the novel, who in Mr. Đỉnh’s telling appeared impervious to missiles, bombs and bullets, escaping certain death several times. And of course Bin, the fiercest of the Bahnar warriors, and Binh’s guardian, shadow and guide.

We ask him about the character of Kohler, an American captive enlisted as a farmhand and menial laborer by the Bahnar in the novel. Was he real?

Mr. Đỉnh explains that, while he never met any personally, some American soldiers were captured and imprisoned “for various purposes.” Normally, however, such P.O.W.s would be transferred to Hanoi. The inspiration for docile, nervous Kohler came from an American veteran Mr. Đỉnh met after the war, on one of the many exchange programs organized by the two countries.

Unlike “The Sorrow of War,” in which the conflict affects every part of the story, destroying the lives of its characters, in Mr. Đỉnh’s novel it functions more as a background to the action. Apart from several skirmishes with American troops, and the occasional buzz of reconnaissance planes overhead, the plot focuses on Binh’s immersion in the culture of the Bahnar, his bonds with the group, and the challenges of jungle survival. In fact, the forest, for all its dangers, protects Binh and his comrades from the war, especially giving them cover from the Americans in their helicopters and planes. As Mr. Đỉnh writes, “Sometimes jungles are so quiet that even war can’t rouse them.”

However, while the action in “Lost in the Jungle” tends to be on the light side, Mr. Đỉnh describes his own years of war as ones of near-constant fear and violence. “I joined up at 17 years old, and hadn’t really wanted to fight. But suddenly I was surrounded by bombing and people dying all around me,” he says. On the way to the frontline, he caught malaria, and was laid up in a field hospital at the DMZ for a short time. There he met a staff sergeant from Gia Lai who recruited him to fight with the guerrillas in the south.

“An Khê at that time was the most dangerous place in Vietnam,” Mr. Đỉnh says. “Not only did we face the Americans, but also the Australians, and toughest of all, the South Koreans, who were the most experienced and ruthless soldiers in the jungle. Each day would bring at least two or three battles. Death was a very normal thing. The years ’68 to ’69 were the worst, with nonstop American bombing. Sometimes, when the planes finally left, you’d find yourself trapped in the roots of enormous trees that the bombs had upturned.” 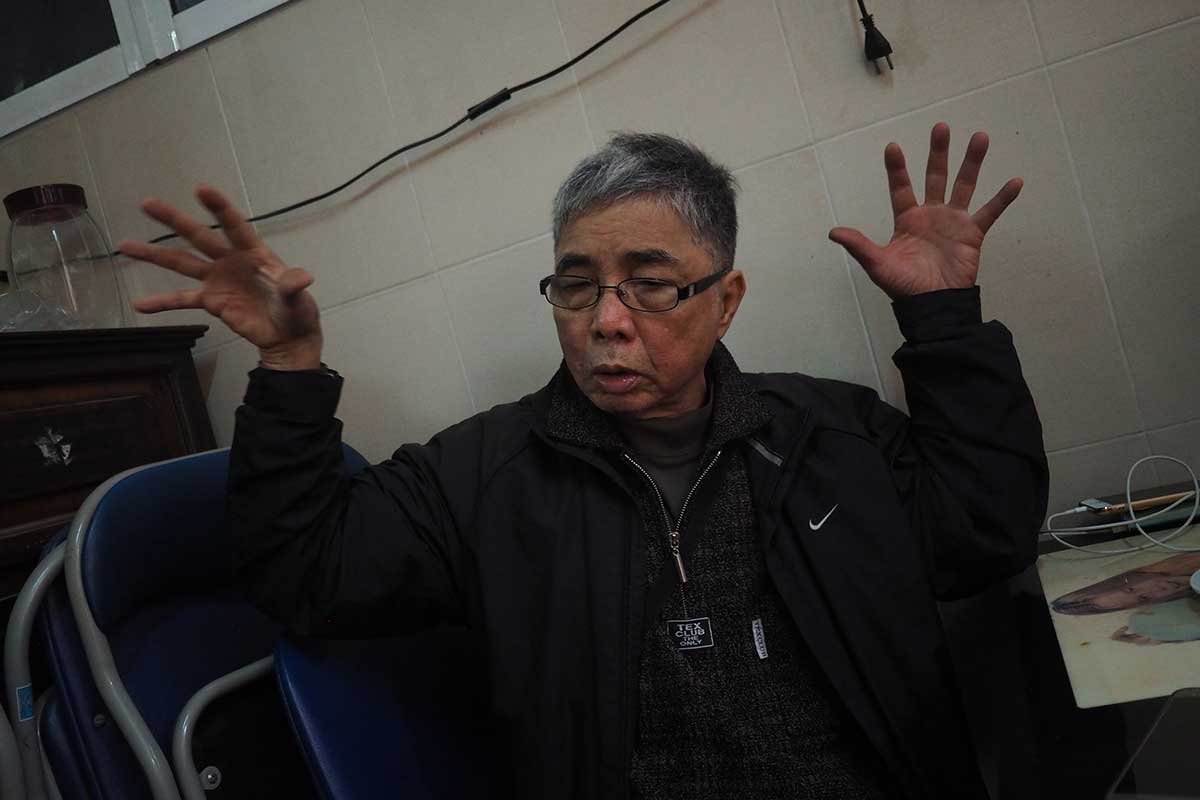 For many years afterward, he says, the war haunted him. “I’d hear a wall fan start up and jump, thinking it was a helicopter, have nightmares about the loudspeaker voices from propaganda planes over the jungle.” In the period after 1975, he tells me he “aged heavily,” no doubt suffering from what we’d now call PTSD.

He began to write “Lost in the Jungle” in 1980. “As a child I’d been a great daydreamer,” he says. “I remember reading Hemingway’s The Old Man and the Sea, about a fisherman lost in the ocean, and thinking, ‘One day, I’ll write an even better story than this!’ During the war, of course, there was no time to write anything. I just took notes mainly, for tactical purposes. But I think that dream about writing a book like ‘The Old Man and the Sea’ stayed with me.”

“Lost in the Jungle” took him 10 years to write, and five different drafts, but went on to win several awards, and it launched Mr. Đỉnh’s career as a writer.

I ask if he has read any war fiction by American soldier-authors, such as Karl Marlantes and Tim O’Brien.

“Some,” he says vaguely, “but not much.” The reality is that, even today, few such works are available in Vietnamese, making it difficult for a non-English-speaker like Mr. Đỉnh. He has read foreign classics of the genre, and argues that no one has topped Erich Maria Remarque. “He best captured the atmosphere of war.”

But what of “The Vietnam War,” Ken Burns and Lynn Novick’s acclaimed documentary, which has a Vietnamese-subtitled version, and featured his great friend Bao Ninh?

He has seen a few episodes, he says. “Interesting,” he admits, “and mostly correct. But I found some of the choices for interviewees strange. They went for diversity rather than expertise. It was impossible to explore the most important points in depth. Everything Bao Ninh said was right, but some of the others, I wondered how well-qualified they were to speak.”

I ask him what he makes of America’s ongoing fascination with the war. While American artists and writers continue to create new work on the topic, the Vietnamese (in Vietnam at least) have produced relatively little since the 1990s. Likewise, American visitors to Vietnam are often astonished by locals’ willingness to forgive and move on. Would today’s Vietnamese simply rather forget about the experience?

“No,” he replies bluntly. “It’s just that, for Vietnamese, the feelings and memories are so heavy. It’s not easy to share.” And as for the youth, even his own son, studying in London at the moment, they don’t want to hear war stories, he says. “If the young aren’t interested in the war, it’s fine,” he waves a hand dismissively. “Let them live.”

Far from melancholy, though, Mr. Đỉnh seems to have enjoyed this wander into the past. He tells some funny stories about motivational meetings with the revolutionary cadres back in An Khê. They would set a blackboard up against a tree and go through the dialectic. “Are we on the way up or down?” they once asked the group rhetorically.

“I just say down because the way is easier,” he explained.

“I didn’t really want to go to war,” Mr. Đỉnh says, as our cafe starts to clear out for lunchtime, “but in April 1968, every able-bodied young person had to sign up. And all the time I fought, I never thought of victory.” He quotes the poet Nguyễn Duy, “Phe nào thắng thì nhân dân đều bại” – “Whichever side wins, the people lose.” 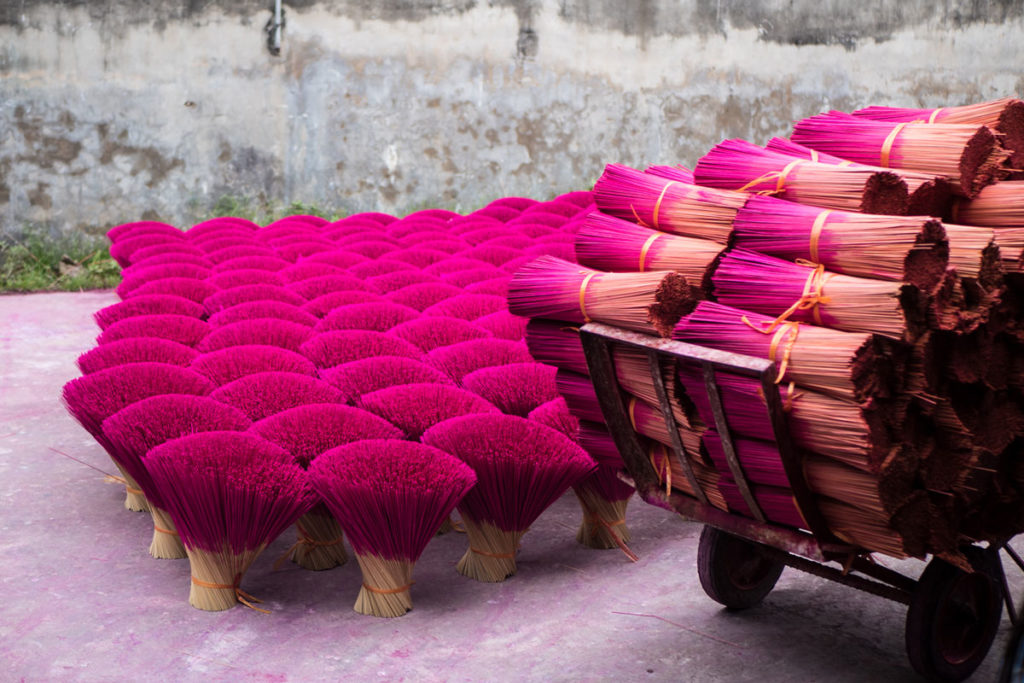 Interview with the Incense King 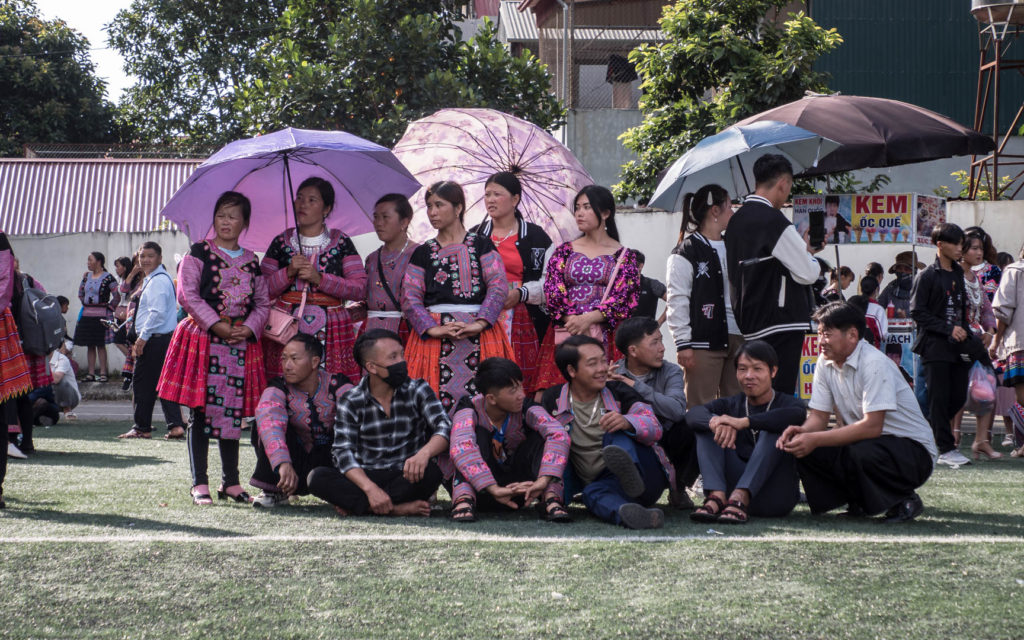 The Love Market is a little old place where we can GET TOGETHER! 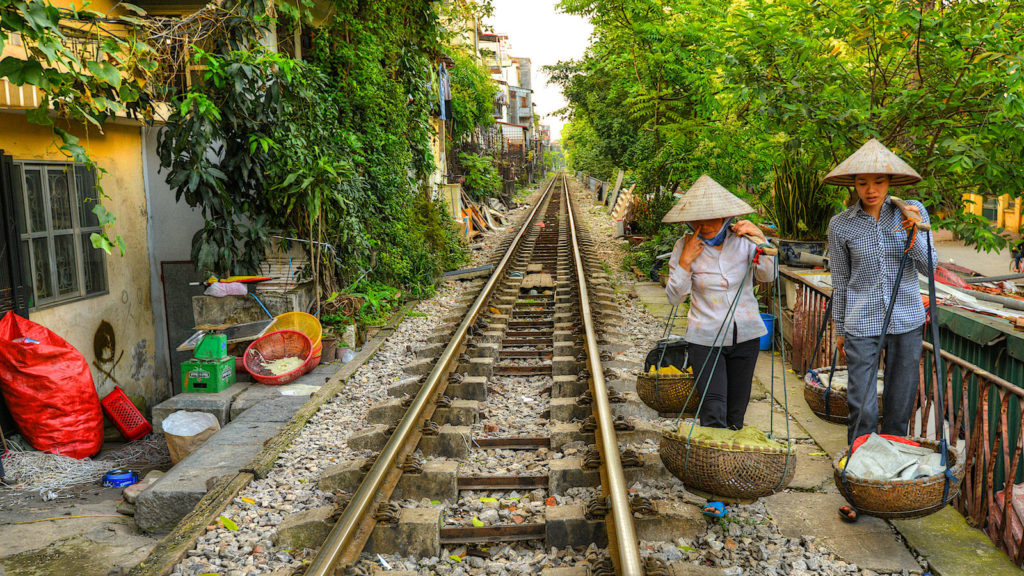 The rise and fall of ‘Train Street’ 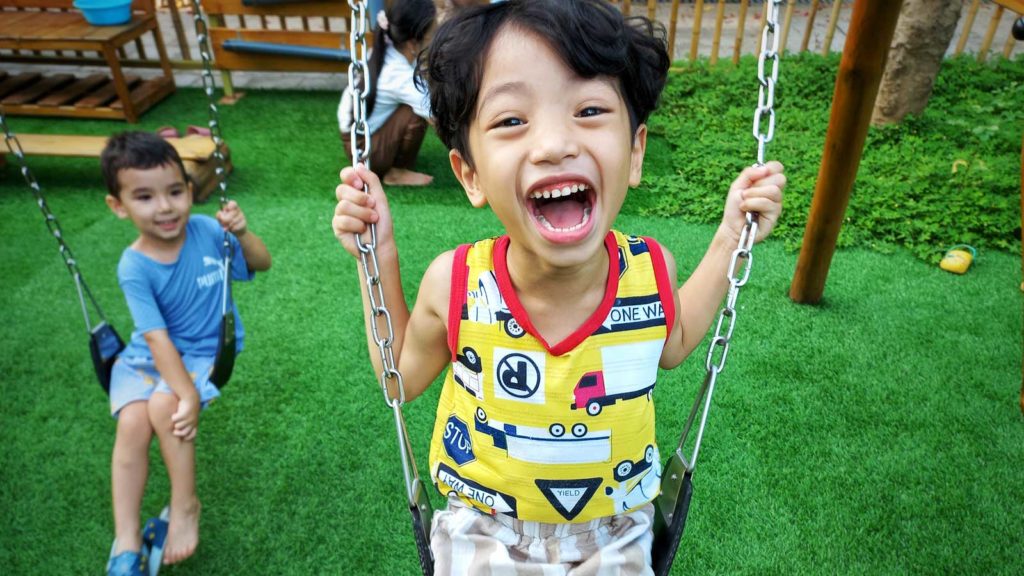